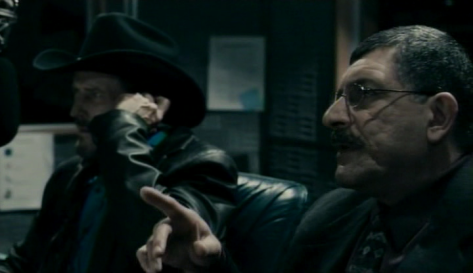 It’s called Pontypool and it is a superb addition to the zombie genre. Canadian made and loved/hated at TIFF last year. “Why?”, you may ask. Well because it isn’t your typical zombie film. For the opening third, it is a darkly humorous film about Grant Mazzy (Stephen McHattie) who is new to the morning segment on a radio station in Pontypool, Ontario (a small town – actually pretty close by to where I am). In opposition of the walking dead attacking from the first moment the film begins, Grant tries to liven up the news for the few people that may be listening. He does this in hope of riling them up and starting a vicious chain that winds up having everyone and their uncles tuning into his copious blunt ranting. Much to the digressing of DJ/mixer for the station Sydney (Lisa Houle), he continues his rants in spotty areas – she eventually gets him to focus on being simple and therefore attempting to warm the viewers heart on the snowy Valentines Day.

Suddenly, the Sunshine Weatherman for the station finds himself in a precarious position perched above a fizzling and riotous crowd found outside a doctor’s office. They are chanting incoherent dribble – the weatherman is afraid for his life and tries to escape the area as fast as possible. For the better part of the movie, Sydney, Grant and their co-DJ Laurel (Georgina Reilly) try to confirm that what they’re being told is accurate and not just a hoax. Flying in through the wire are orders from French-Canadian officials trying to coax the station, as well as trying to spread the message that what is occurring outside isn’t a joke.

At the festival I heard people calling this “a half-hearted zombie film” and once heard someone shout “Why make a zombie movie without zombies?!” in disgust. Well, there are zombies throughout the movie, but it certainly isn’t your run-of-the-mill, dime a dozen zombie film filled with cheap thrills and a plot that is coddled to its audience.

This is none of those – albeit a tad turgent – but all in all a suspenseful and refreshing watch.

The majority of the film is a very tense and brooding thriller of a film – there is hardly anything zombie related for the majority of the film. What it lacks in aggressive and immediate violence is made up for in witty dialogue and a very interesting concept that is executed expertly. Although the opening is a tad tiring and eventually redundant, once the material begins to accelerate it never stops. This leads to an adrenaline pumping conclusion and a very grim one at that.

For a film that takes place in one small area for the entire running time, it is quite engaging. There are a few turns that make the film more exciting for the viewer, but the integrity of the feature is never compromised in lieu of it. The flaws would be the obvious annoying cliches that hinder over almost every horror film (ie. doing the one thing that would help you avoid harm), but all in all its an original and enjoyable little film that makes me proud of the Canadian cinematic scene.

Fascinating script, solid cast… see it. A definite must for all fans of zombie movies. [8/10]