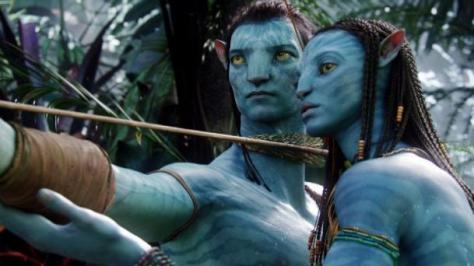 Twelve years and nearly half a billion dollars in the making is Avatar, James Cameron’s first film since shattering practically everything – the Oscars, the box office, people’s hearts – with 1997’s Titanic. Many speculated that this was too big to fail, others speculated that it was made too big to be successful. When word of mouth broke out a week or so ago and the raves started pouring in, everyone seemed reassured that Cameron had maintained the focused grandiose that earned him the label as one of Hollywood’s best. So whether it was the good early reviews or just because a blockbuster in time for the holiday season is as good as any gift you’d find beneath a Christmas tree, the excitement built. With my IMAX 3D ticket in hand, I walked into the screening hoping to behold what others have; a masterpiece (this is not to say I had such expectations as many often misunderstand).

Sadly, this is no masterpiece.

With such a gap between Titanic and this feature, many were speculating if Cameron still had it. Well, don’t worry yourself because he definite still has it. Unfortunately, *it* entails retaining his poor construction of dialogue and unique plot as much as it does encompass his knack for handling large budgets meticulously and thus painting across each frame with poignant visual individuality.

If you’ve lived under a rock since July, here’s the plot: Jake Sully (Sam Worthington) joins up with a mercenary core on Pandora, a planet that takes roughly five years to get to and one that is filled with Unobtainium (yes, that’s what it’s called and most surprisingly… it’s rare). He joins along side ex-marines and other men with combat experience who are trying to get into the depths of the sacred land to pry out this expensive mineral. Jake is so easily accepted into the operation because they had spent a lot of money on funding his brother’s Avatar and Jake shares the same gnome as him and “why let money go to waste?”.

Cut and dry characterization plays a main purpose in this story, especially in understanding Jake’s reason for being there. It is understood that Jake feels the need to prove to himself that he can fill his brother’s shoes – one of the top scientists on the project before dying – and hopes to contribute as much to the research as he can, being a simpleminded, paraplegic soldier with no knowledge of this land, their people or his purpose with his new Avatar. Then there’s a mean ‘ole colonel (Stephen Lang), a Na’vi (native of Pandora) he falls in love with named Neytiri (Zoe Saldana) and a duo of cohorts that are both intelligent, but somewhat jealous of Jake’s ability to convert with the Na’vi so easily in the snide Dr. Augustine (Sigourney Weaver) and Norm (Joel Moore). All very palpable scripting; nothing too offensive, but nothing too interesting either.

An initial issue people may find with the vision of the film is how often it’s contradicted. The most immediate examples of Cameron’s counter-productivity in intertwining his focused mind with his shaky hand are found primarily wherever Neytiri’s teaching of Na’vi rituals are the cause of Jake’s elation. By having Jake shoot his mouth off and screaming “Crap!” or various other words/phrases that come with his crass obviousness, a contrasting aesthetic to the one Cameron’s has wrapped the character around is formed. With this, the whimsy that flows naturally with Cameron’s vision of Pandora’s indigenous wonder is hit over the head with blunt dialogue that is meant to identify your average Joe with Jake.

In another contradiction – though this one finds more suitable with the intended contrast – while it’s inarguable that it takes a creative mind to form an entirely original language, what is arguable is how far that creativity in speech extends itself. Apart from the remarkable creation that is the native tongue of the Na’vi, Cameron drops the ball with humans. The film is set in 2154 and slang terminology from this decade (and even some from a few decades ago) is very prominent in the language of soldiers and scientists. I get the purpose behind it – to make them rugged, one-track minded people to root against – but it’s rudimentary to evolve the English language as well to keep up with the times, especially if you’re making a film with purpose and dignity.

Apart from a structure so obvious it’ll make viewers believe they’re clairvoyant and characters written with fewer dimensions than the film is presented in, there are the performances. This is a common case of people being given mundane roles to flesh out with their individual interpretation and creativity. You know this is the case when Giovanni Ribisi turns out the most engaging piece of work in a short role, while Sam Worthington — an actor who only seems to be getting major roles because he looks the part of action star — in the leading role finds himself in nearly every frame can’t find a moment of clarity. Then there’s Zoe Saldana, who – even though is covered in computer generation for the entirety – is the primary reason the film is able to get viewers to feel emotionally compelled. There’s a testament somewhere in here to Cameron’s new technology that captures the facial expressions of his actors and translates them into CGI images, but for the most part it’s the vocal work of Saldana and co. that makes the Na’vi’s so authentic and not any intricacies Cameron has conjured up.

What saves this from being the biggest disappointment of the year is the final act. Does it deter from the recycled path of the two prior? Of course not, this is James Cameron, people. Rather, it’s that Cameron finally indulges in the effects that were said to be unlike anything you’d seen before. Sure, the first scene with Jake being pulled out of the cryogenic chamber and having the employees floating around is breathtaking and the overplaying the aspect that everything the Na’vi’s touch create a delicate unity/energy (the tree’s vines lighting up or walking along paths that light up with each step, for example) is delightful, but it isn’t until he lets go with the myriad of explosions and extraordinary fight scenes does Cameron’s megalomania realize any true potential in this. It’s as if he injected the final act with a shot adrenaline – one that didn’t dissipate until Leona Lewis’ hymn-like song chimed in. It is only the final act that saves Avatar from being the least impressive use of such a budget since Evan Almighty.

Because the intoxicating atmosphere Cameron provides for his wide-eyed viewers is matched only by his inability to write something profound and barely passable, Avatar manages to balance itself out quite well. It’s thanks to the simple gestures in the earlier acts (the despondency of losing your legs for a second time, the elegance that is found with the Na’vi’s inherent ways of ‘connecting’ to one and other) that keeps the film afloat until the third act comes by and rescues it from drowning in mediocrity.

Although Avatar is obvious from top to bottom, the package which Cameron presents the feature in is undeniably special. If not for the lack of emotional resonance or psychological depth – each of which heavily highlight the garishness of the film – this could have been as monumental as Cameron wished. Sometimes it is nice to watch new dogs perform old tricks. This is one of those times, if just.